What Does the Media Say is Happening in Venezuela? 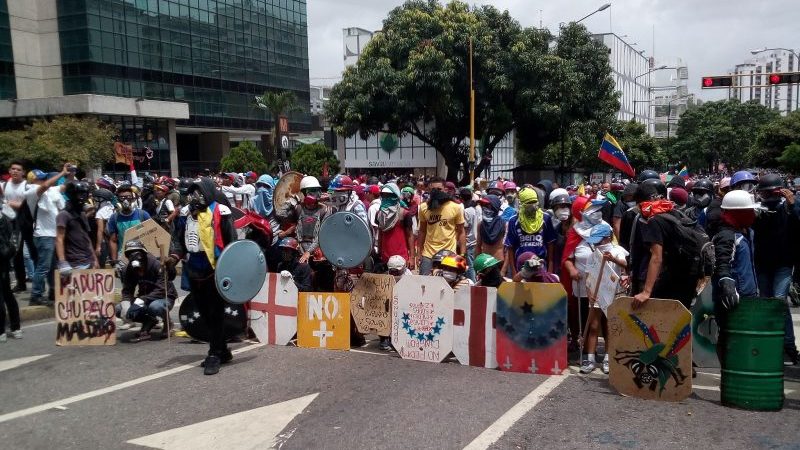 There has been extensive news coverage of the ongoing political crisis in Venezuela (including our own), but not every media outlet frames the story in the same way. How does coverage differ across news outlets? How would a reader who depends on only one source of information interpret what is happening in Venezuela?

To learn more about how Venezuela is being framed, the NewsFrames team decided to conduct a high-level review of reporting from three global news outlets with significantly different world views: The Miami Herald, Al Jazeera in English, and Russia Today. Using Media Cloud, an open-source content analysis tool that maps media coverage of current events, we compared recent coverage on Venezuela. We then chose relevant articles cited in the Media Cloud server for close analysis of topic and meaning.

We chose these three English-language outlets based on widely held assumptions about their different audiences and different geopolitical views. We focused on topics, keywords and implicit opinion as seen through word choice in news stories, rather than explicit positions taken by editorial boards and opinion writers. Would the difference be visible when comparing their news narratives?

For our analysis, we employed Media Cloud to explore stories with the word “Venezuela” published by the outlets between March 30 and June 29, 2017. We analyzed only written stories available online, while taking note that two of our media outlets, Russia Today and Al Jazeera English, are also international broadcasters. Media Cloud helped us identify the most frequent keywords associated with Venezuela in its collections of news stories (word clouds are graphical representations of word frequency in selected articles. More on how we use Media Cloud here).

Comparing the Media Cloud results across the three outlets, we found similarities and differences in topics covered. Word clouds for each of the three news outlets are below. Mentions of Venezuela's president, Nicolás Maduro, and “protests/protesters” clearly dominate news coverage for all. 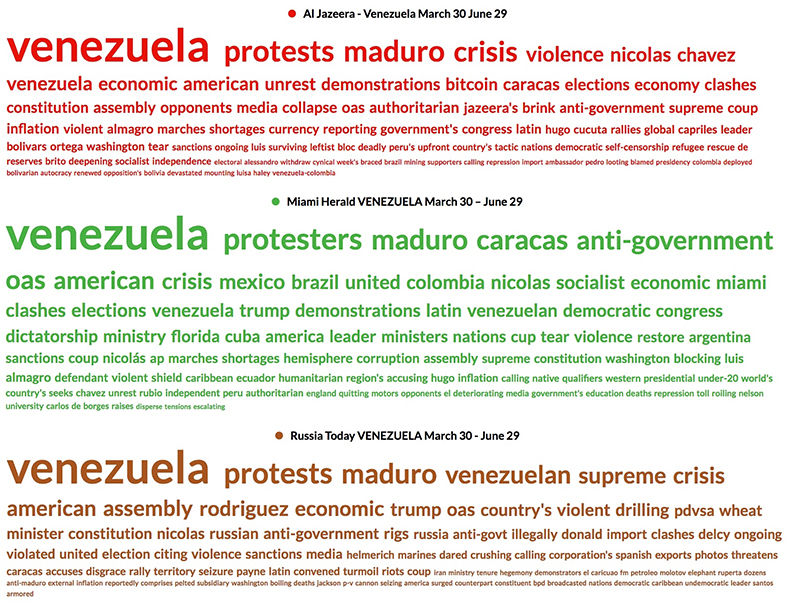 Emphasizing Maduro and protests or protesters, these top results from Media Cloud sampled content from Al Jazeera in English, Miami Herald, and Russia Today (March 30 – June 29, 2017) show keywords across three outlets. The size of the word indicates frequency of use.

When we look at other frequently-appearing words in the cloud and the news articles associated with them, we can see different editorial priorities for each news outlet. “Maduro” and “protests/protesters” are within the first five words for each of these sources, but the other topics vary substantially.

How the Miami Herald Reported On Venezuela

The Miami Herald's coverage is distinguished by frequent references to the Organization of American States (OAS) and other countries in the region. In particular, this most prolific outlet among our comparisons focused on the OAS’s attempted push for presidential elections as a possible solution to the Venezuela's crises.

Miami Herald coverage on Venezuela from March 31 – June 29. There were 254 stories on Venezuela published within the 90 days of period of analysis, or 2.8 stories each day on average. (View larger image)

The Miami Herald also emphasized the importance of Latin American countries, including Mexico, Brazil, Argentina, Colombia, Peru, Cuba and the Caribbean countries, in building support for a resolution.

With a United States metropolitan audience that includes the largest Venezuelan population in the U.S., Miami Herald coverage highlights how the economic crisis is leading to an humanitarian crisis, and also covers local demonstrations.

Overall, Miami Herald coverage emphasizes international mediation to resolve the political crisis in Venezuela, whether through the mediation of the Vatican, the intervention of the OAS or the efforts of Latin American countries in the region with strong historic ties with Venezuela.

This network gave Venezuela relatively little coverage during the first weeks of protests. However, in May the number of stories about Venezuela published by Al Jazeera increased. During a 90-day period of protests, AJE published 77 stories.

In April 2017, when other news outlets were covering anti-government protests, Al Jazeera's major story about Venezuela was about the fad of bitcoin mining among Venezuelans both at home and abroad.

By May 1, 2017, AJE began to ask “what is happening today in Venezuela?” Based on stories identified by Media Cloud, it appears that AJE stories on Venezuela covered many factors in the conflict, including the deadlock between the Supreme Court and the National Assembly, the economic and the public health system crises, the ideas of the “Bolivarian Revolution”, and ongoing clashes among opposition demonstrators and government forces.

In addition, Al Jazeera gave special attention to the role of media in the political crisis, and has examined competing media narratives as well as censorship.

Throughout this cycle of protests, Al Jazeera coverage demonstrates an increasing criticism of chavism, the Venezuelan political movement of supporters of the late President Chavez. Past AJE coverage of chavism had been very positive. Since last May, Al Jazeera's coverage has increasingly emphasized Venezuela's economic crisis and how the current situation stems from policies of the Chavez government.

Russia Today (RT) tells a very different story about Venezuela. RT does not report on the overall context in which violence occurs. The Miami Herald and AJE have focused on the details of how individuals died and who was responsible, allowing for differences among individual cases and causes. The violence includes the deaths of more than 70 demonstrators under varied circumstances, and some 30 other people who were not taking part in protests, including: five security agents, 12 people walking or standing nearby protests, some of them in their homes, and 11 people who participated in looting.

RT's reporting in contrast mentions no violence on the part of the military, police or pro-government paramilitaries. Instead, according to RT, violence in Venezuela is caused by demonstrators, who alone are responsible for any and all deaths.

RT's position on “violent” demonstrators is captured in the allegations of Elías Jaua, a prominent chavist figure in charge of advancing the new communal constitution, who said:

The death of people during the riots was often caused by the actions of the rioters themselves. They either walked into the crosshairs of the opposition snipers or found themselves in chaotic situations that led to their death.

In addition, according to RT, violent demonstrations that aimed to overthrow President Maduro over the past months are supported by foreign intervention. RT repeatedly reports that the “interventionism” of the Organization of American States is behind the anti-government protests in Venezuela, seemingly taking its lead from Venezuela's Foreign Affairs Minister, Delcy Rodríguez. Russia Today's coverage attempts to portray Venezuela's political crisis as caused specifically by the United States, theoretically motivated by the goal of capturing Venezuela's oil resources.

The Kremlin-backed organ focuses on testimony from government sources without considering testimony from opposition leaders or Venezuelan NGOs about the problems they are experiencing. Among the media outlets examined for this article, RT devoted the least coverage to the Venezuelan crisis. RT has only published 36 stories about Venezuela over 90 days, most of them in May.

A Starting Point for Understanding How Reporting Is Framed

Noting the different representations about the role of other countries or an emphasis on long-standing versus immediate causes of violence is not merely a simple matter of diversity in news coverage on the crisis in Venezuela. Our analysis demonstrates evident differences in choices of topic, language, and preferred witnesses and accounts. It shows that these decisions can be critical to shifting the framing of the news.

Our analysis does not attempt to be conclusive, but rather is a starting point to consider the complications of explaining what’s happening in Venezuela. It is also an opportunity to consider the imagined audiences for these outlets — readers around the world with varying concerns and perspectives — and why having more than one source of news may be critical.

UPDATE, 19 January 2018: Thanks to Lenin Maury who contributed to the building of the NewsFrames Venezuela collection.