Lone Wolves are ‘Terrorists’ Too

How we talk about terror needs a rethink 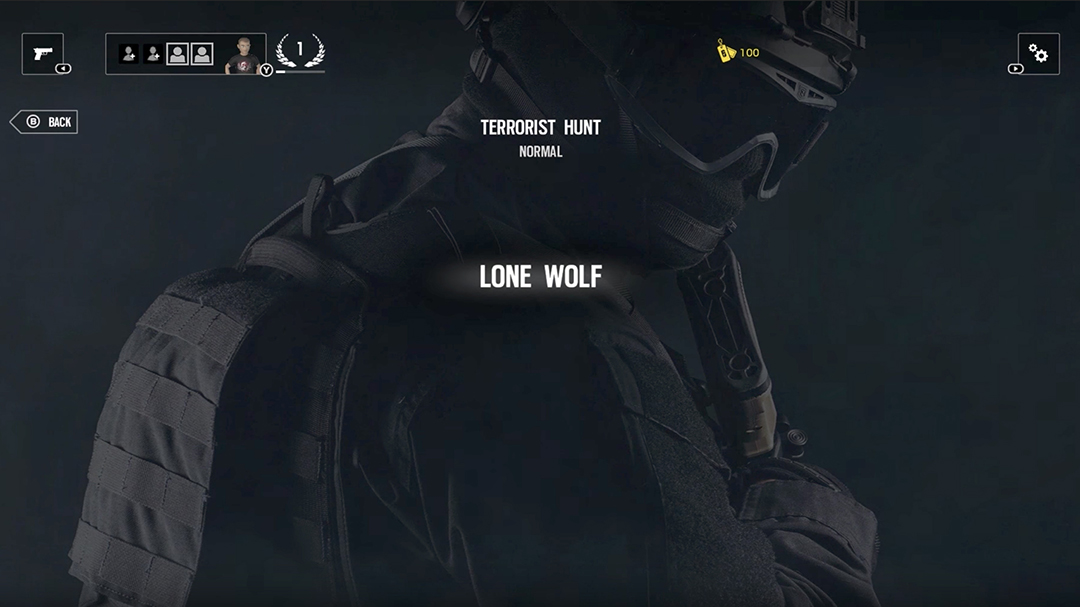 A burgeoning topic of debate after the Las Vegas shootings is whether the perpetrator of the tragedy should be described as a “lone wolf” rather than a “terrorist.” A prevalent argument is that calling killers lone wolves rather than terrorists is a kind of preferential treatment for whites, especially in contrast to perpetrators of color, especially if they are also Muslim.

The term lone wolf has romantic associations with individualism and the mythologies of the American West. In contrast, as discussed by the Global Voices community, perpetrators of color and Muslims are too often by default assumed to be or labeled “terrorists” in the U.S.

This framing is rhetorically compelling, but wrong, for the simple reason that the U.S. media, law enforcement and others use term “lone wolf” to characterize terrorists, and Muslims and people of color as well. The thought that there is privilege and bias at work in U.S. news stories about terror and mass shootings is true, but it plays out in other ways.

In fact, references to Muslims or Islam are among the most frequent themes in U.S. media whenever the story is about either a lone wolf killer or a terrorist.

A high-level view of media coverage in recent top US news outlets show that there have been plenty of stories about lone wolves related to Islam or Muslims.

Data from Media Cloud, a platform for studying media ecosystems, provides us with the evidence: a search for “lone wolf” identifies 3,657 stories about lone wolves in U.S. online news sources from January 1, 2016 to the present (Media Cloud is a partner on our NewsFrames project). “Terrorist” is the most frequently associated word, and terms like ‘Islamic,” “Isis,” and “Muslim” or “Jihadist” also rank highly in the randomized sample. 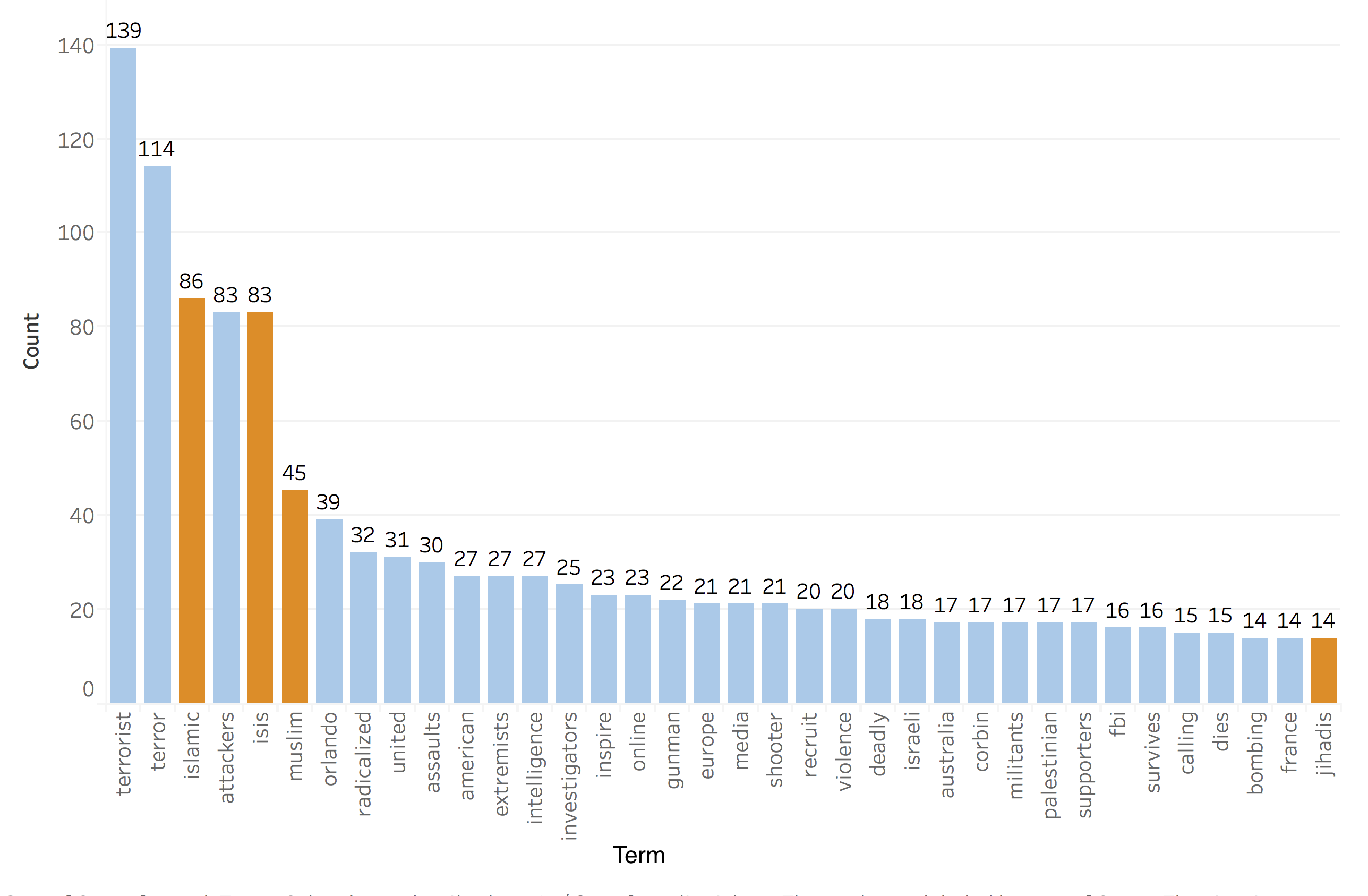 Most frequent terms associated with “lone wolf” in a sample of the US Top Online News collection from January 1, 2016 to October 5, 2017. Source: Media Cloud (View Larger Image)

The frequency of “terrorist” may be because there a social science category for “lone wolf terrorist,” as this 2014 paper from the International Centre for Counter-Terrorism, or this 2015 Georgetown Security Studies research demonstrates. According to the research, the U.S. had more lone wolf terror attacks than any other country, with 113 between 1968 and 2010. And interestingly, lone wolf terror attacks were explicitly encouraged by U.S. white supremacist groups beginning in the 1990s. Despite that, they find that at present, “lone wolves seem to come from all kinds of ideological and religious extremist corners,” and that the primary commonality between lone wolf attacks can be found in personality traits, psychology, or socialization paths rather than ideology.[1]

And yet, the Media Cloud data shows that the term in contemporary U.S. media is also often associated with Islam. This may reflect an increase in lone wolf tactics by individuals claiming that affiliation, but also likely the U.S.'s continuing obsession with Islamic radicalization, both among the political class and in public discourse. This is true despite the fact that over the past several decades, more terror in the U.S. has been committed by far-right extremists than by Islamist extremists.

Digging further into 465 stories that featured “lone wolf” and “Islam” or “Muslim” in the same sentence, these narratives reveal a strong association with Muslims and lone wolves in U.S. news reporting. This is partly due to reports that ISIS (here or here) and radical Muslim clerics like Anwar al-Awlaki encouraged lone wolf operations.

Descriptions of Muslims in the United States as lone wolf killers have appeared in the news in the past year, in the cases of Omar Mateen in Orlando or Syed Rizwan Farook in San Bernandino — although, in the latter case characterized together with his wife as a “jihadist,” so not exactly alone.

Moderator Lester Holt raised the issue in dramatic fashion in questions to Bernie Sanders and Hilary Clinton during the 2016 Democratic Party Presidential Debates, in discussing ISIS and lone wolf attacks in the U.S.: “We've got to recognize our first line of defense against lone wolf attacks is among Muslim Americans,” Clinton said.

The larger complication is how we associate mass shooting and terrorism. The frequent association in news coverage between “terrorist” with Muslims or Islam has been shown before, and data we found also supports this.

Even removing consideration of “ISIS,” this sampling of 89,442 online US news stories for the same period shows that the terms “Islamic” and “Muslim” are among the most frequent in stories that also use the word “terrorist.” Though some of these articles may be profiling Muslim victims of terrorist attacks, the terms “jihadist” and “islamist” confirm that the term is frequently associated with perpetrators. 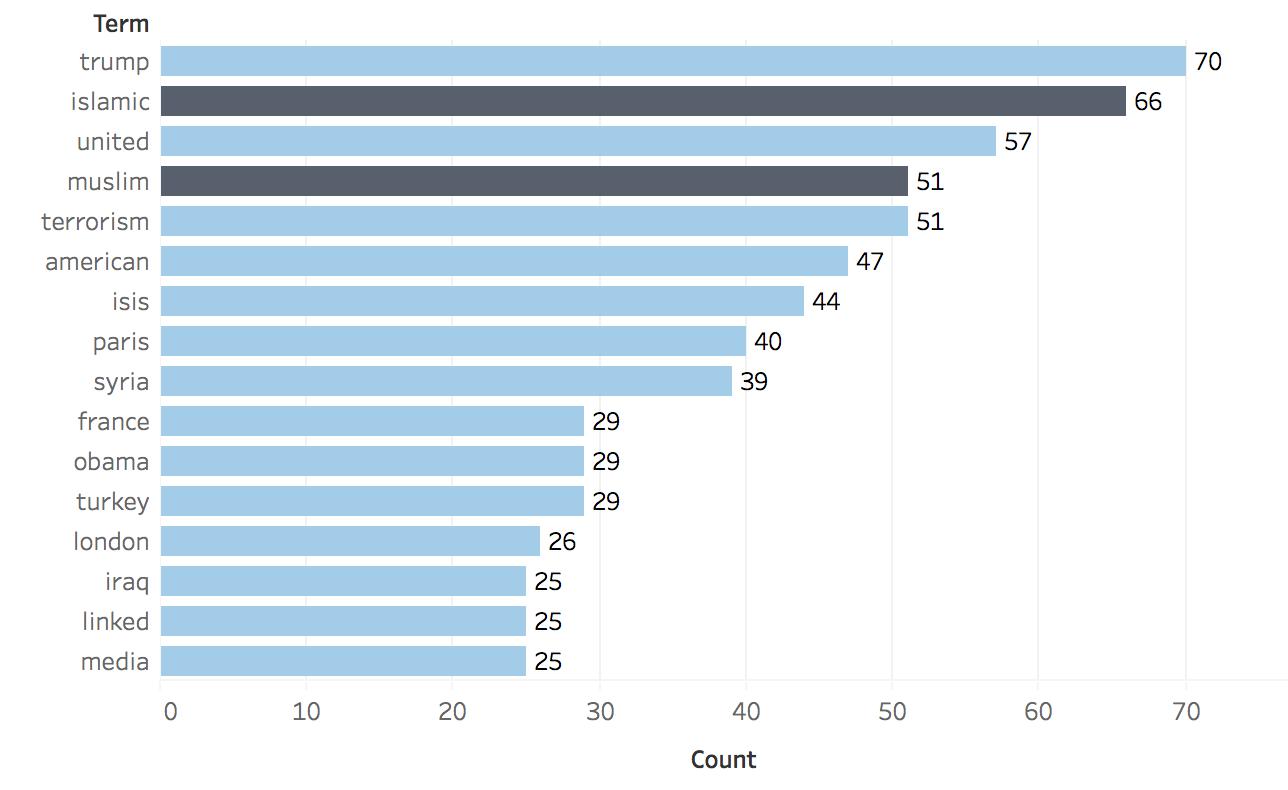 Most frequent terms associated with “terrorist” in a sample from the US Top Online News collection from January 1, 2016 to October 5, 2017. “Islamist” and “jihadist” were also included among the top 500 terms. Source: Media Cloud (View larger image)

When it comes to the United States, the legal application of the term “terrorism” is supposed to meet certain thresholds, including evidence of political motive. This recent article reminds us that the legal definition of domestic terrorism requires attempts to instill fear in the population and have ideological ends.

Yet commentary about the Las Vegas shooting also notes that in Nevada state law, any significantly destructive act could also be considered terrorism. This definition opens up the question of why the Nevada shooter has not been characterized as a terrorist.

US news has frequently focused on external violent actors, lone wolf or not, encouraged by organizations such as the Islamic State. Yet data that reflects the spread of terror acts globally paints a different overall picture. According the Global Terrorism Database, an open-source database including information on terrorist events around the world, last year saw the following number of incidents around the world:

Incidents of Terrorism by Region in 2016, Source: Global Terrorism Database [2]

Matching this picture against one that a Media Cloud sample provides of coverage in top US online news sources in the same time period in 2016, we find a different weighting of coverage focus after the Middle East and North Africa.

Dominant terms around “terrorist” with regional and country references in a sample of 2016 US Top Online News. Source: Media Cloud (View larger image)

This is not to say that local or national coverage must reflect global ratios. News outlets always focus more stories that are proximate, familiar, or historically relevant to their audiences.

And yet, data in the Global Terrorism Database findings show us how reporting could be different. For example, the Philippines ranked in the top five countries in 2016 to experience terrorist events, with 633 incidents. The Philippines and the United States have a long and contentious historical relationship, yet fewer stories on the Filipino experience with terror skews U.S. understanding of its influence and the effects of terror acts globally.

The coverage of terror and mass shootings is rife with similar bias in coverage. The data shows us that in mainstream U.S. media there has been a dominant association between Islamic extremism and terror in news coverage. And that is also true for the use of the term “lone wolf,” despite the fact that more terror acts in the U.S. have historically been committed by far-right extremists than by Islamic radicals.

This ratio of extremist attacks may not always stay constant. The frequency and nature of attacks in recent years has changed; this challenges our understanding of extremist violence. Yet the available data helps us understand that our depictions of lone wolves and terrorists are too simple. We should take seriously the observation that what links “lone wolves” are factors in personality, psychology, and socialization, rather than ideology. We need to find better ways to characterize people who cause terror and a language that does justice to everyone touched by it.

Data related to this article can be found on Github.[1] “U.S. had more lone wolf…”: Ramon Spaaij, “The Enigma of Lone Wolf Terrorism An Assessment,” Studies in Conflict and Terrorism 33, no. 9 (2010), cited in both Edwin Baker and Beatrice de Graaf, “Lone Wolves: How to Prevent This Phenomenon,” International Centre for Counter-Terrorism – The Hague (2014) and “Report: Lone Wolf Terrorism,” Georgetown Security Studies Program National Security Critical Issue Task Force (2015); “encouraged by U.S. white supremacist groups” and “all kinds of ideological and religious extremist”: (Baker and de Graaf, 2014).

[2] National Consortium for the Study of Terrorism and Responses to Terrorism (START). (2016). Global Terrorism Database [Data file]. Retrieved from https://www.start.umd.edu/gtd

Ivan Sigal contributed to this article.