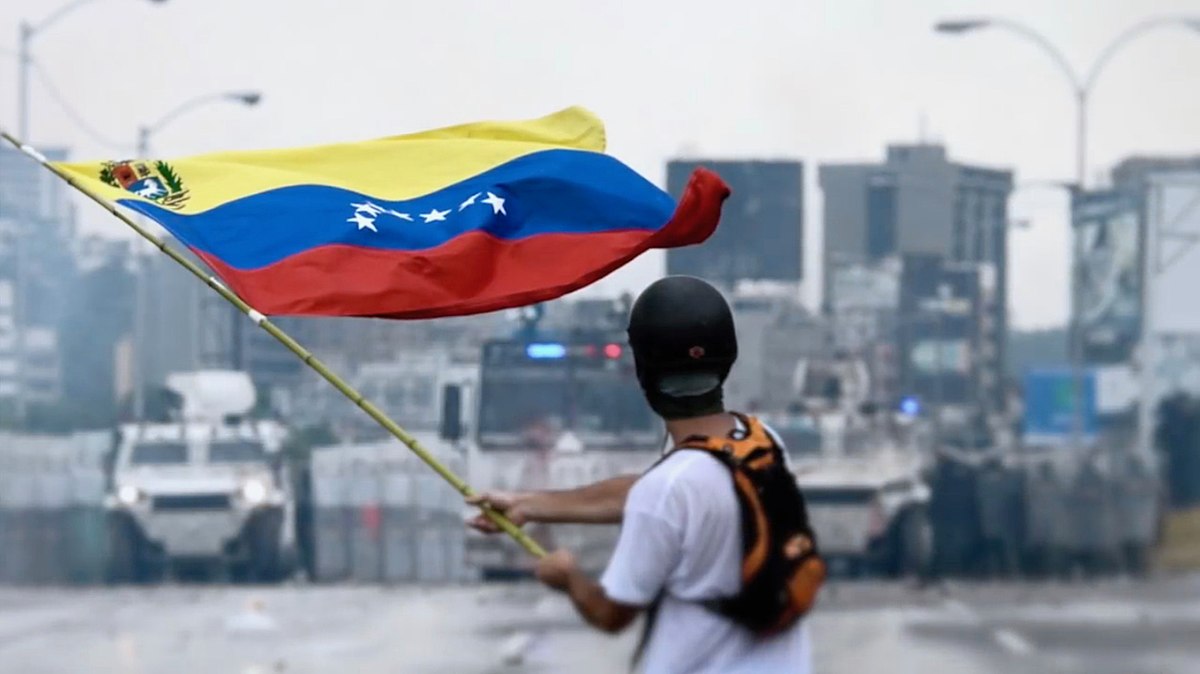 The Spanish word patria means “homeland or adoptive land organized as a nation, to which the human being feels bound by legal, historical and affective bonds”.

In the Venezuelan news media, patria is a word that appears frequently. Examining stories appearing within 86 Venezuelan sources between the months of June and December 2017, we discover that word patria appears in at least 17,020 news stories. During that period, Venezuela experienced a cycle of mass protests against the government, the emergence and decline of a civil resistance movement, and three controversial elections for a Constituent Assembly, governors and mayors.

Number of sentences containing ‘patria’ in the media collections during the June-December 2017 time period of our investigation. Source: Media Cloud.

When we analyze dominant terms among those 17 thousand stories, many of them make sense. The notion of homeland, of nation or country, seems to have natural associations with terms like nacional, pueblo, país, soberanía and república (national, people, country, sovereignty and republic), regardless of national context. As we are searching Venezuelan media, it also makes sense that we should find references to the country and its citizens (Venezuela, venezolanos), its history (independence hero Simón Bolívar) or political values such as unidad, paz, and justicia (unity, peace, and justice). 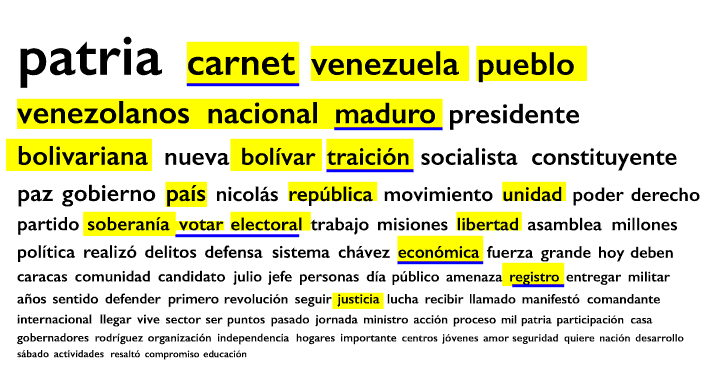 But we also found word pairings with patria that appeared to be specific to Venezuela. Patria was often found, for instance, in news about the Venezuelan economy, such as this story about proposed new rules for bank loans to enterprises. We found it as well in this story about President Maduro calling on people to vote for the government in elections.

The most prominent word in the cloud, however, is carnet (ID card). What does the idea of “homeland” have to do with an ID card?  For a Venezuelan, the answer to that question is obvious.

The Homeland Card (“Carnet de la Patria”) is a new identity card issued by the Venezuelan government. Venezuelan citizens need this card to access welfare services as well as public programs such as the following:

According to President Maduro, 16 million people are registered users of the Homeland Card. This figure constitutes more than a half of the national population.

And indeed, when limiting the search to focus on stories that pair patria and carnet, words related to social welfare programs (misiones, CLAP, pago, bono, pensiones, chamba ) stand out in the cloud. 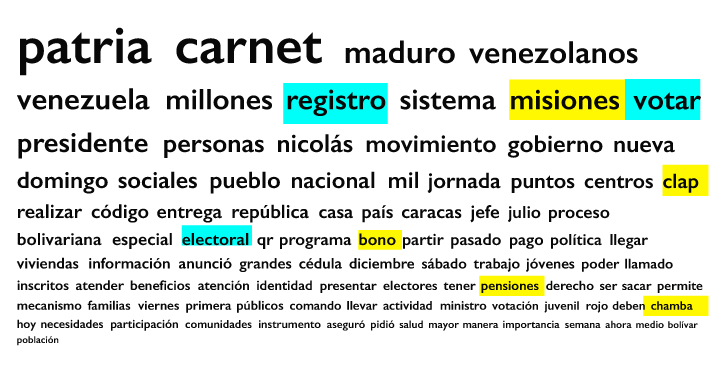 Source: Media Cloud. Digging deeper in the search for themes around ‘carnet’ and ‘patria’.

But words associated with elections (votar, electoral, registro) emerge as well. What does social services have to do elections? We looked among the articles referenced in Media Cloud to find out.

Here's what we discovered: On the back of the Homeland Card there is a QR code that links to a centralized social security database. The same QR code was used to register voters for the recent controversial Constituent Assembly.

By means of the QR code, the government party can access welfare information for around around 80% of registered voters, according to figures cited by President Maduro. Indeed, there may be an even deeper connection between elections and social services: after the December 10 mayoral elections, several news reports from independent online media argued that the Homeland Card (“Carnet de la Patria”) was used to coerce people to vote:

So for Venezuelans, “homeland” (patria) is now a term that can refer to election fraud or basic foodstuff, rather than notions of nation or sovereignty. As a Venezuelan, the word patria also evokes tales of hunger and political humiliation from friends, acquaintances, and relatives still living in our ExPatria.

To learn more about Venezuela's notion of homeland, here are some more stories from Global Voices:

Community  May 4, 2018
END_OF_DOCUMENT_TOKEN_TO_BE_REPLACED
Cancel this reply