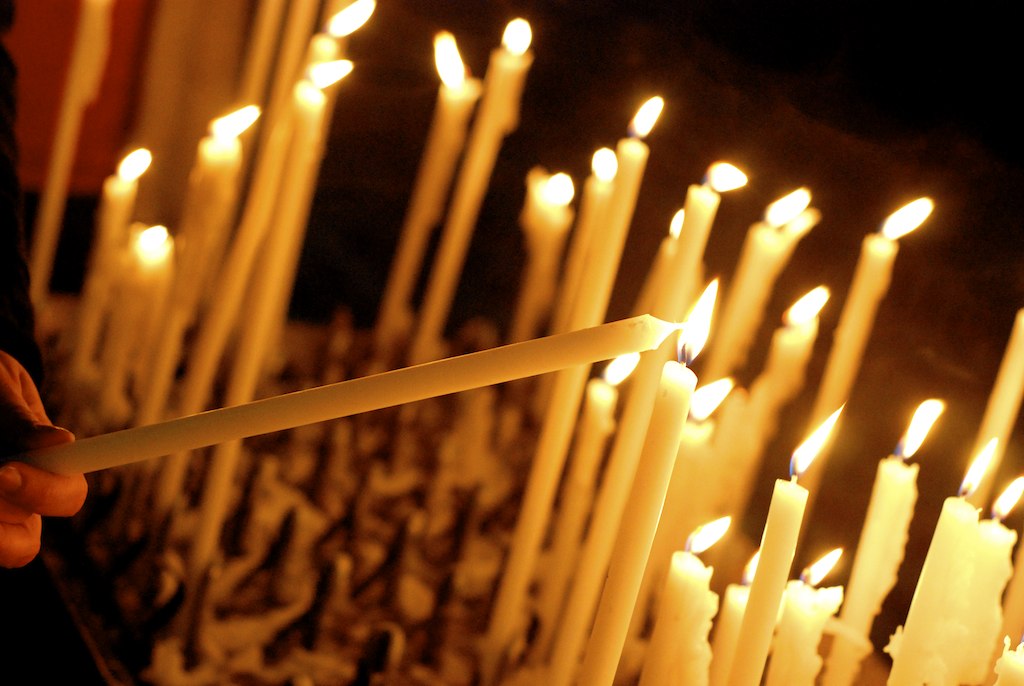 What's the first thing that comes to mind when you hear the word honor? The answer to this question might differ depending on the nature and kind of media you consume every day. In this latest edition of Culture Shots we explore how honor/honour is used in mainstream Pakistani and US media.

So, why look at the US and Pakistan? We chose to analyze US media because it frequently covers Pakistan and we picked Pakistan because recent stories tied to issues of honor have been making international headlines. It’s also one of the Muslim countries most widely covered in Western media, so we felt that this would be an interesting opportunity to examine the contrast between their coverage of the term.

Dictionary.com gives three definitions that include a noun for “honesty, fairness, or integrity in one's beliefs and actions” to a verb for “to hold in honor or high respect; revere.”

To get a better sense of its everyday, cultural use, we created a search in the Media Cloud database for articles published from 2015-2017 which contained the words honor or honour, first from media sources popular among US readers and then from English-language sources popular in Pakistan. How different or similar would they be? 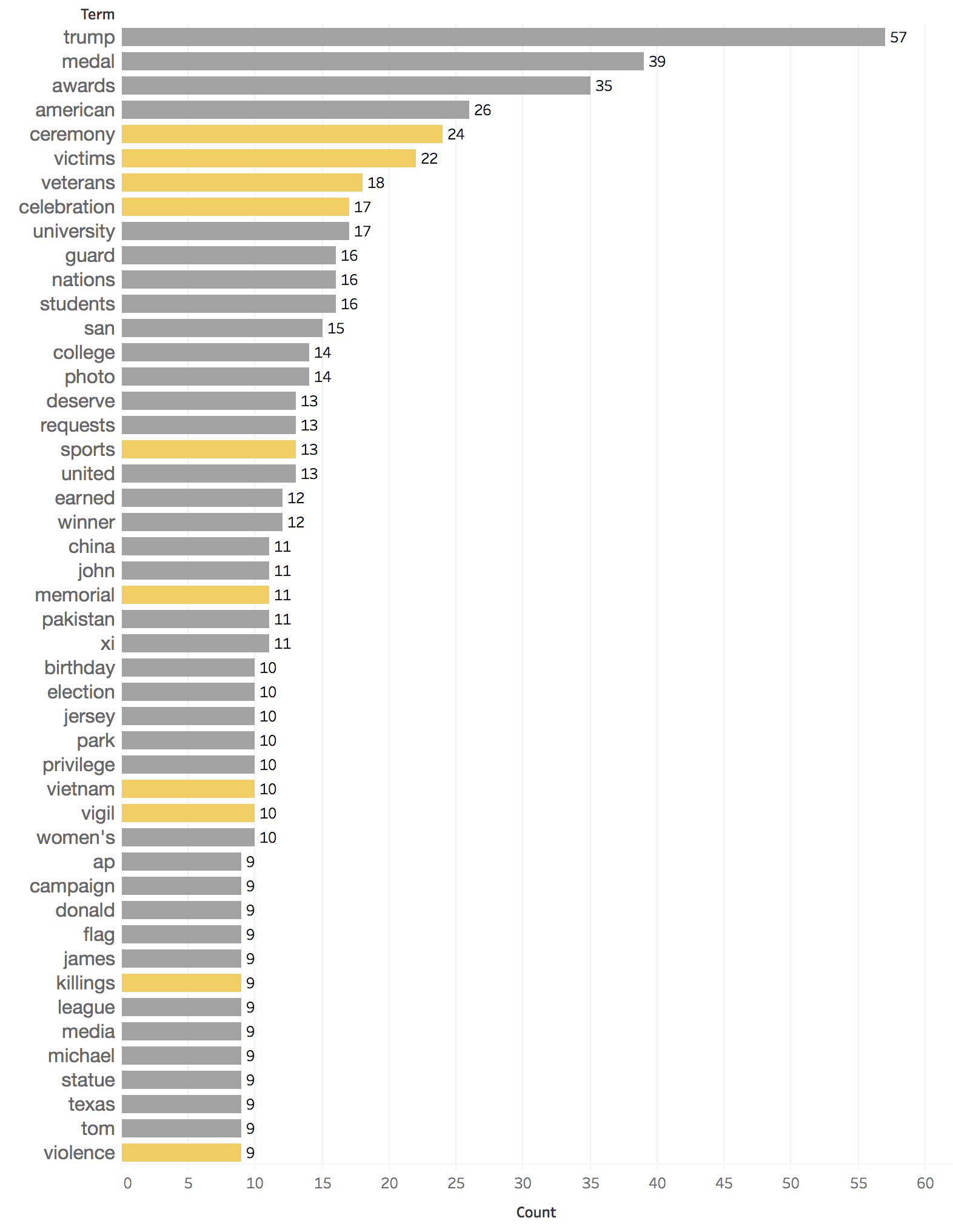 This graph represents topics that appear alongside the term honor/honour in order of prevalence in a sampling of stories from the Media Cloud of US Top Online News Collection for ‘honor’ or ‘honour’ from 2015-2017 (original query).

“Memorial,” “veterans” and “vigil” in the US

As we can see in the graph, there are a number of interesting keywords that are associated with the word honor/honour. For this analysis, we have focused on some of the keywords and some possible interpretations of the data. In US outlets, honor is often related to pride, celebration, and paying respect to the wishes of someone — sometimes in unexpected ways:

During the past two years, US-oriented media outlets published over 155,000 stories containing the word honor or honour. Some prominent keywords that caught our eye include memorial, veterans and vigil.

What kind of memorial? The Vietnam war and the mass shootings in Orlando and Virginia were prominent topics. These articles referred to incidents of violence and used the term honor to celebrate and pay respect to the survivors and victims of violent attacks, including the June 2016 mass shooting in a gay nightclub in Orlando and a Memorial Day event honoring veterans at Arlington National Cemetery.

Honor was also used in many articles focused on veterans, survivors of violent attacks, and heroes or people held in high regard.

Overall, it struck us that when it came to reporting instances of violence, such as shootings or terrorist attacks, the word honor was predominantly connected to the act of paying respect to survivors or victims.

“Martyrs”, “army” and “victims” in Pakistan

This association between victims and honor/honour, was also pronounced when compared with the analysis of English-language news from Pakistani media sources. Among the most popular related words were martyrs, army, and victims. 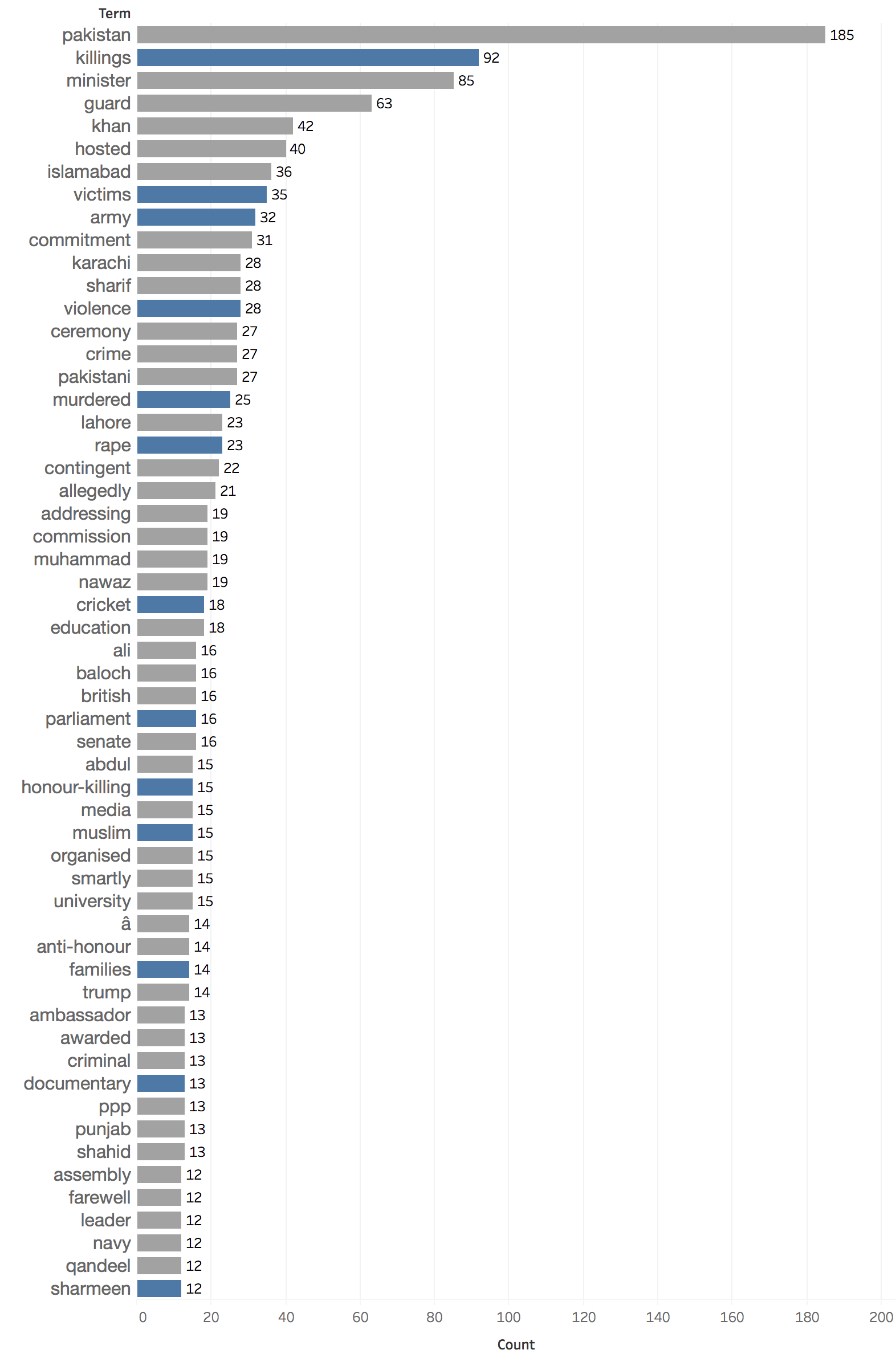 This graph represents topics that appear alongside the term honor/honour in order of prevalence in a sampling of stories from the Media Cloud search for ‘honor’ or ‘honour’ in the NewsFrames Pakistan collection from 2015 to 2017 (original query).

In the past two years, these Pakistan-focused media outlets published at least 11,185 stories containing the word honor/honour.

Stories about the military and soldiers featured quite prominently. Analyzing martyrs further revealed coverage of soldiers and citizens who died as a result of terrorist attacks. A story about Pakistani flying officer Maryam Mukhtar who died when her plane crashed during a training mission is a prominent example.

A review of these stories revealed that killings, victims and violence featured prominently in both Pakistan and US media coverage. But when it came to the coverage of violence and Pakistan or other South Asian countries, instances of honor in both media ecosystems also included stories about killings or violent crimes perpetrated by Muslim men.

For example, in US media coverage related to stories of killings and Pakistan, mentions of Sharmeen Obaid-Chinoy were prominent. Sharmeen Obaid-Chinoy is an Oscar-winning documentary filmmaker who made a film about a Pakistani honor killing survivor. Other Pakistan-specific terms include murdered, raped and families.

In Pakistan, an honor killing is commonly understood as “the murder of a family member by another, due to the belief that the victim has brought dishonor upon the family.”

One interpretation of the data leads us to similarities between US media and Pakistan media’s coverage of events related to victims and heroes, as in veterans and martyrs. However, in contrast to US-focused coverage, examinations of the Pakistani usage of honor/honour suggest that references to acts of violence which restore honor to the perpetrators are possibly some of the ways that the meaning of the word diverges in its use from one country to another.

Whether or not the term honor killing, in fact, represents a significantly different meaning across unique cultural contexts will require a deeper look into the data and is something we will delve into in a future post.

But for now, this first dive into the results helps us to ask focused questions about cultural difference and similarity. Such as this one: In the US or Pakistan, the use of honor or honour in our reporting raises an interesting question — does there exist a robust sense of honor outside of the realms of war and death?

Here are some related stories on this topic from Global Voices. Happy reading!

Community  May 4, 2018
END_OF_DOCUMENT_TOKEN_TO_BE_REPLACED
Cancel this reply