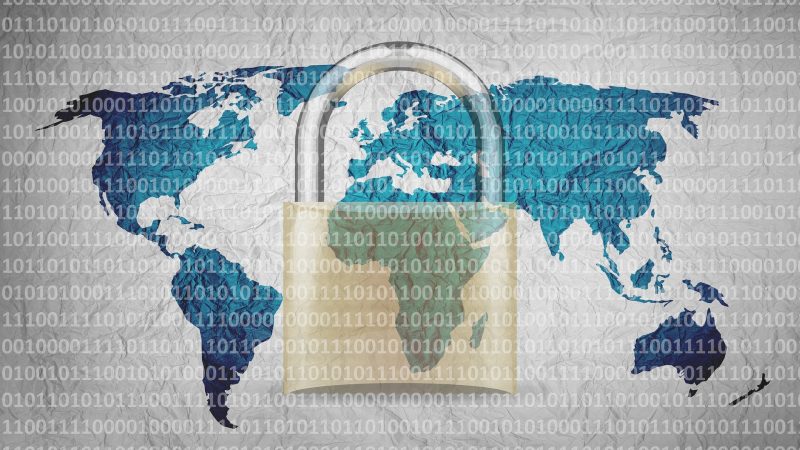 Recently, privacy has been a popular topic in online media conversations. The term privacy has many different definitions, among them is the act of being secluded, out of the sight, hidden or concealed. In the Longman Dictionary of Contemporary English, another definition for privacy is “the state of being free from public attention“, while the Merriam Webster Dictionary defines it as “freedom from unauthorized intrusion“.

While the general understanding of the scope of privacy depends on the context in which it is used, in this Culture Shot we wanted to look at how the US media has been talking about issues of privacy recently. As we looked closely at stories around privacy from US Top Online News sources between March 10, 2017, and March 9, 2018, it seems as though there is a feeling that privacy may be under threat.

The Word Cloud below represents keywords that appear frequently in US media conversations around the theme of privacy. The larger the word in a Word Cloud, the more often it appears in the Media Cloud database sample of news reports, blogs, and other media.

Media Cloud is an open source platform developed by the MIT Center for Civic Media and the Harvard Berkman Klein Center for Internet and Society. Media Cloud is designed to aggregate, analyze, deliver and visualize information while answering quantitative and qualitative questions about the content of online media.

Analyzing the language in the US Top 50 media sources (a collection of the top 50 news sources with the largest readership according to the Pew Research Center), Media Cloud´s Explorer helps us to identify reporting trends related to privacy. The search resulted in 28,494 stories published between March 10, 2017 and March 9, 2018. We decided to focus on three key trends: changes in privacy regulations, cases of privacy invasion, and evasions of inquiries due to privacy concerns.

In 2017, issues of privacy made headlines due to the repeal of the internet privacy rules that had been enforced by the Federal Communications Commission (FCC) since 2015. The repeal of these rules (which among other provisions mandated that broadband providers tell customers about how their data is being collected) caused a stir and called into question how private information is being used by US companies. As we can see in the chart below, issues of online privacy peaked in March 2017 when the US House of Representatives passed the repeal of the FCC rules approved during the Obama administration. Nearly 400 stories on the repeal of the internet privacy rules were published by the US Top Online News media in March 2017.

The frequency chart shows the number sentences containing the terms “privacy” found each day within the search time frame ( March 2017-March 2018) in the US Top 50 collection during the time period. Source: Media Cloud.

The stories that were covered during this period included articles about how some companies might try to take advantage of these looser privacy regulations and others about how internet providers that have decided to protect their customers’ private information:

The new legislation — which only needs President Trump’s signature to become law — would make it easier for internet providers to sell your browsing history and other information about your online habits to third parties. But just as giant carriers are seeing new avenues for data collection and ad revenue opening up, two California-based internet providers have pledged not to sell their customers’ browsing history, or any other data.

Nonetheless, the most controversial case of invasion of privacy in the Top 50 Online News sources was the case of two anti-abortion activists charged with invasion of privacy after they recorded videos in a Planned Parenthood clinic in California. Following the case, the media emphasized the right to privacy for people that were recorded without consent. The case was prominent mainly because it underscores the conflict between the right to privacy and right to freedom of expression. Indeed, the anti-abortion activist's defense framed it as an issue where citizen journalists were fighting for the 1st Amendment right to free speech:

California has long had stronger privacy protections than most states, including banning surreptitious recording of others. In 1998, the California Supreme Court decided that the news media could be held liable for recording a private person without consent. The defense of anti-abortion activists attempted to allege journalistic privilege and to use 1st Amendment to challenge to privacy protection statute.

Protection of privacy was a common thread, while specific topics in these stories vary widely, including sexual abuse, homophobia and transphobia, domestic violence, abortion, mental health problems, as well as federal administration appointees failing to pay taxes and the unnecessary use of government planes. In the Word Space below, the words are clustered based on the number of times they appeared in the same sentence, and the size indicates its prevalence in the whole dataset. In this case, more than 300 stories contained sentences in which the words declined and citing appeared in the same sentence with privacy. 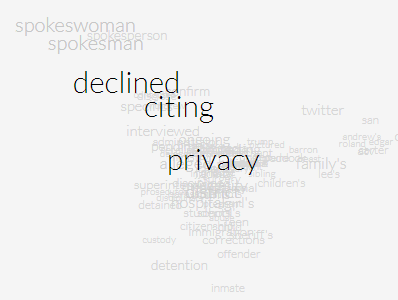 Words Space of stories in which “privacy” concerns were alleged in order to avoid answering reporters´ questions.

More precisely, the common theme among these stories is that the media faces challenges when trying to provide coverage because the people affected (witnesses and spokespersons) decline to respond to inquiries, arguing privacy concerns or legal provisions. Whether or not these privacy protection arguments are legitimate or simply a means to evade discussing uncomfortable truths can be argued both ways.

In the case of the Delaware school system, when journalists asked pointed questions about transgendered students ability to access facilities that match their gender identity — spokespersons from a majority of the schools questioned declined to answer based on “privacy concerns”:

While privacy protection is understandable in cases of personal matters, sometimes privacy is also alleged as a justification to avoid oversight into government decisions. As we can see in the following article, US Attorney General Jeff Sessions employs the argument of privacy as a way to avoid answering questions about his conversations with the president:

Attorney General Jeff Sessions declined to answer certain questions during his Senate Intelligence Committee hearing, citing an obligation to protect the privacy of his communications with the president. The idea behind executive privilege is that the executive branch has the right to have internal conversations that remain private for national security reasons or to ensure government functions properly.

Analysis of stories that fell within the parameters of our search led us to insights into a noteworthy concern for privacy and the sensation that we need to protect it. However, as we can see, how privacy rules are protected and implemented are in flux and depend greatly on context.

Here are some Global Voices stories related to the topic of privacy.

Community  May 4, 2018
END_OF_DOCUMENT_TOKEN_TO_BE_REPLACED
Cancel this reply