Launched in 2016, Phase I of NewsFrames was a two-year initiative from Global Voices aimed at:

The initiative was aimed at answering the following questions:

NewsFrames has been an opportunity to take seriously the challenges of diverse cultures, ethics, and truth in reporting — through the lens of data — all while having a lot of fun and joy in between.

The NewsFrames platform brings together checklists and tools journalists can use when working on stories, to facilitate collaboration, as well as generate data for media analysis.

Features of the NewFrames platform include a collaborative writing space for teams, using the features of Etherpad, and media analysis tools:

The NewsFrames platform can be accessed at www.newsframes.org. Code for Version 1.x of the NewsFrames Platform, along with its open source license, can be found on GitHub. 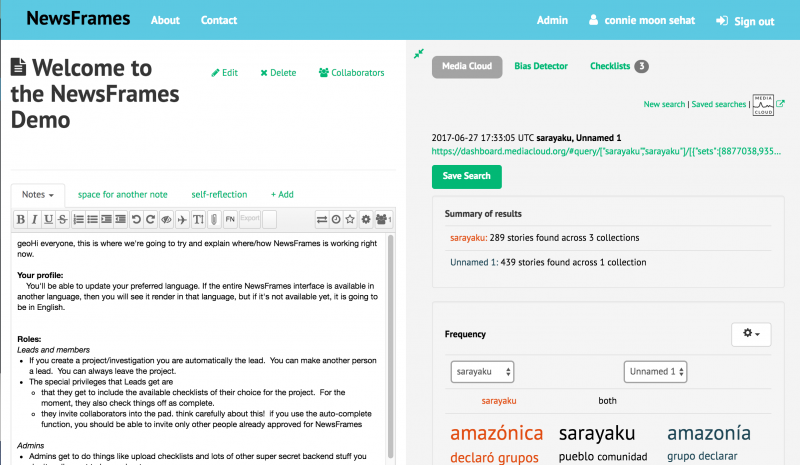 Language localization of the NewsFrames user interface was accomplished via Transifex, and is currently in French and Spanish.

NewsFrames collaborated with a variety of organizations around the world, including:

NewsFrames presented its work and findings at a number of international events, including:

How to Start Your Own Investigation

While the NewsFrames project is on “pause” as of May 31, 2018, it is still possible to use the NewsFrames platform to conduct an investigation. Refer to the short Getting Started With NewsFrames guide, and contact Eddie Avila or Ivan Sigal for more information.