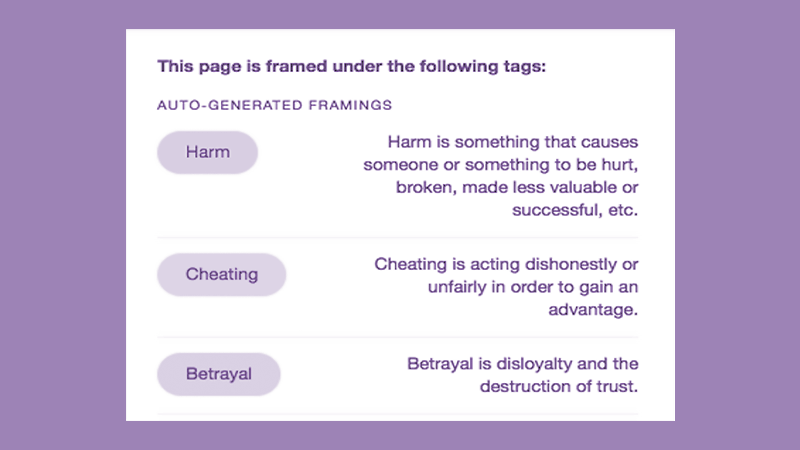 Examples of moral framing “tags” that can be assigned to stories in the Pano System.

How do our moral values underpin our narratives, or frame our stories? At NewsFrames, we've called attention to framing's moral dimensions [1], and were intrigued to come across work from members of the Massachusetts Institute of Technology Computer Science and Artificial Intelligence Laboratory (MIT CSAIL) working on this problem.

We spoke with Amy Zhang, a PhD student at MIT CSAIL, to learn more about moral framing and “Pano,” a news commenting project produced by members of the Haystack Group [2]. Specifically, we talked about how moral values appear in online discussion spaces, whether they happen to be in news or broader civic discourse.

Global Voices: How do you define “frame” or, given your interests, “moral framing”?

Amy: Moral framing is the set of underlying moral values that are implied when an argument is made. We take a great deal of inspiration from Moral Foundations Theory [3], which posits five core moral value pairings — care and harm, fairness and cheating, loyalty and betrayal, authority and subversion, sanctity and degradation — and different people care about these values at different levels.

These differences also manifest in groups, such as a different emphasis in values by liberals versus conservatives. As a result, when an argument is made that deploys a particular moral value, if the reader does not care about that value as much, the argument holds less weight.

This is how you get the phenomenon of people “talking past each other” and getting nowhere even though they might be actively engaging.

Amy: Our group, led by David Karger of MIT CSAIL, just did a study focusing on immigration issues in the United States, including illegal immigration and border control, the future of Deferred Action for Childhood Arrivals [4] (DACA), and immigration policy for refugees. We had people over the course of several days read articles arguing different sides and tag and comment on the articles — using a new moral framing system built by my colleague Jessica Wang called Pano [5] — while applying moral framing theory. After the study was over, we went back to look at the comments and found instances where people changed the framing of their argumentation over time to better match the opposing side.

For instance, liberals tend to value care (or its opposite, harm) arguments more while conservatives respond more to arguments framed around authority and loyalty. In arguing for more pro-immigration policies to a conservative audience, we saw participants employ arguments framed in terms of authority and loyalty values, such as arguing about how DREAMers [6] feel patriotic towards the U.S. and have low crime rates, where earlier they were mainly employing care frames, such as arguing about the suffering that deportation can cause.

Amy: Today, a great deal of political and civic discourse takes place online. Some people argue that online news consumption and social media discourse is contributing to higher polarization in society and leading to a breakdown in discourse. They point to phenomena such as “filter bubbles [7]“, or the ability, through the personalization that the internet affords, to only receive news and hear opinions that one agrees with. I agree that it is important to work on designing algorithms and interfaces to combat filter bubbles, through strategies like showing more diverse content or showing other sides along with a piece of content, and many people have worked on this.

However, I don't think this goes far enough. Studies have shown that sometimes when people are presented with opposing content, they react negatively [8]. An extreme example of this is the “backfire effect [9]“. So it's not just important to present diverse content to people; we also need to think about how we present that content, what kind of content we present, and we need to give people tools, both as writers and readers, to better engage with the other side.

I think an important aspect of that is framing – both teaching people to recognize framing when it's being used and also to better employ framing when making an argument. 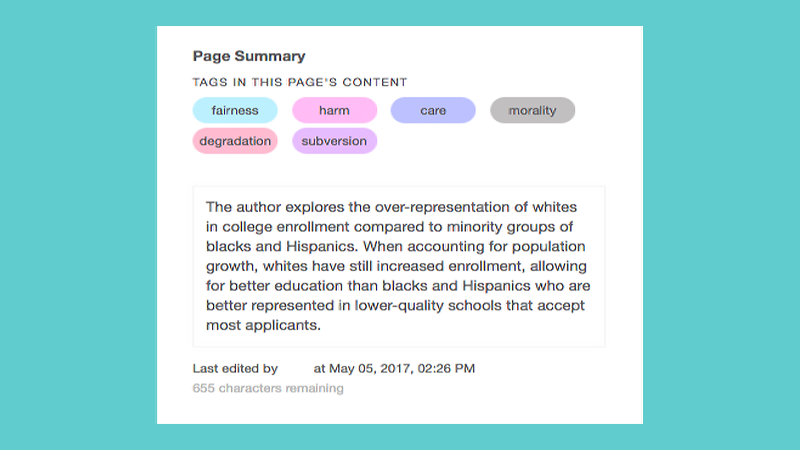 For designers of commenting interfaces in particular, we should also think about how to better present disagreement and diverse opinions in context, with an eye towards frames, as opposed to current systems that rank based on likes or replies and thus promote only majority opinions or opinions that are intentionally provocative. And as recommendation system designers, we should consider how the framing of a piece of content might allow a reader to be more receptive to opposing ideas.

Amy: As you can see by our research direction, I think it is important for news readers and writers to become more aware of frames when they read news and other people's comments and also to be more mindful of what frames they are deploying when they participate in conversation. Maybe they'll be having a frustrating conversation and then realize that it's because everyone is arguing with different underlying moral values. Or maybe they'll take the time to frame their own arguments to match who they're responding to in order to be more persuasive.

At a higher level, we hope that through understanding moral foundations, people can better empathize with the other side towards recognizing how much we all have in common. After all, we all do care about these moral values, just at differing levels.

Global Voices: Can you tell us a little more about yourself? 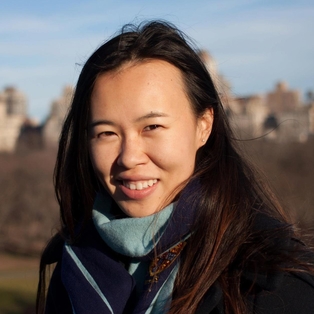 Amy: I am a Ph.D. student in computer science at MIT CSAIL and my area of research is in Human-Computer Interaction, or how we can design and build systems that better interface between humans and machines.

Specifically, I've been focusing in the last several years on building better online discussion systems, such as designing email, forum, and chat interfaces to make it easier for participants to communicate effectively and for readers to more easily comprehend what was said. One thing in particular that I've been interested in is how to better bridge opposing sides.

Global Voices:By the way, where do you live and what languages do you speak? We are an international community and love to know the contexts from which people are speaking.

Amy: I am currently living in Cambridge, Massachusetts in the United States. I speak English and a bit of Mandarin (though I'm hoping to improve my Mandarin skills in the near future!).

This interview was edited and condensed.