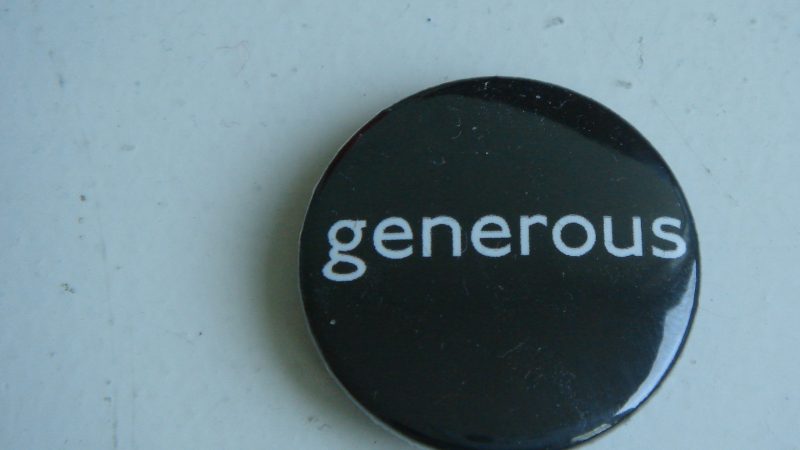 Capsule reports on framing patterns in news coverage on cultural themes, in a small, easy-to-swallow dose!

What does it mean to be generous? Recent coverage up through early September from the US to India such as this story has highlighted the generosity of donors to Hurricane Harvey relief efforts.

People can be generous with money, but you can also be generous, for example, with time. Here are a few contexts in which readers of news and blogs in the United States and India would have come across the term or its siblings (generously, generousness) since the beginning of the year.

Source: Media Cloud. Comparison of terms around “generous” in three US-oriented (left) and three India-oriented (right) English language news and blog collections between January 1 and September 6, 2017, annotations added. The frequency of common terms (in the center) between the two reading communities partly results from outlets that target both audiences, like the BBC (Search query; View larger image)

Love could also be described across the two audience worlds as generous, and in this case used to characterize people facing tragedy or disaster. For example, describing victims as generous and loving was a way to honor them, whether remembering heroic Kristy Boden from the London Bridge attack, murdered Muslim teen Nabra Hassanen in Virginia, or Keralan immigrant Cyriac Joseph.

On the lighter side, the love and generous pairing was also applied to celebrities such as music star Taylor Swift or Bollywood's Shah Rukh Khan. Generosity also appears to be a desirable quality in our significant others (this or this) and maybe dog walkers.

Here's one story that made its ways in a number of US- and India-based outlets due to its origin in the Associated Press (AP):

Source: Media Cloud. US-oriented stories containing sentences with generous outnumbered India-oriented ones 3:1, but unsurprising given this search among english-language sources. Sentence counts did not often break above 200 a day in the US-related collections and hovered around 40 stories a day for Indian ones.

The differences across audiences helped to suggest other possibilities for thinking about how the term generous is used. For example, we were reminded that in the world of cooking, measurements (teaspoon, tablespoon) can be generous:

Comparing and contrasting the dominant word cloud terms also reminded us that countries may or may not have generous refugee policies, and are experiencing strain in light of the migration crises. Examples include Uganda and Germany, Sweden until 2015 , and the possible deportation of Rohingya Muslims from India.

At Global Voices, stories that mentioned generosity were also tied to economics and celebrities, sometimes in unexpected ways:

The weather continues to wreak havoc around the world, as we've reported in connection with the South Asian nations of  Bangladesh, India, and Nepal and in Puerto Rico and across the rest of the Caribbean. Here's hoping that we continue to come together to express our generosity during the weeks to come.