“There is ancestral knowledge in the Sarayaku indigenous community” 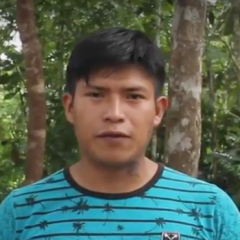 Wiliam San Nicolás is a member of the Kichwa Peoples of Sarayaku located in Amazonian Region of Ecuador, and which has held long fights at a national and international level to stop extraction projects in their territory. The following is a transcript of the video of Wiliam's comment of the word cloud for the term “Sarayaku“. Within the word cloud, the lack of the term “educación” (education) attracted Wiliam's attention.