“To show the youth’s participation in Sarayaku's historic struggle” 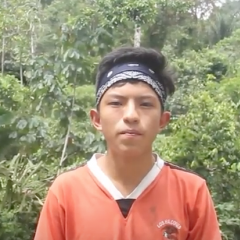 Daniel Benalcázar is a member of the Kichwa Peoples of Sarayaku located in Amazonian Region of Ecuador, and which has held long fights at a national and international level to stop extraction projects in their territory. The following is a transcript of the video of Daniel's comment about the word cloud for the term “Sarayaku“.

I chose this word cloud of the word “Sarayaku” because it is a warrior community, which is composed of elders, adults, youth, girls and boys, as well as rivers, trees and sprits.

I would like this word cloud to show the youth’s participation in Sarayaku's historic struggle. I would also like it to include the word “education” because in Sarayaku we don’t have a quality education, such as the one from the cities.

Belén Febres-Cordero assisted with the proofreading and translation of the post, which was edited for clarity and length.