When a Picture Is Worth a Thousand Wrong Words

How a photo of tragedy was misattributed again and again on social media.
Written by Connie Moon Sehat, Sana Saleem
Posted May 24, 2017 16:08 GMT
Share this: 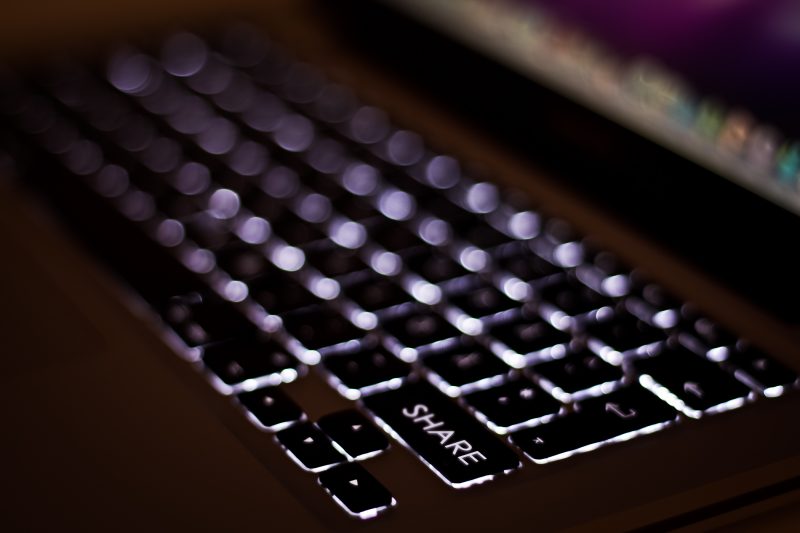 WARNING: This article and the pages it links to contain graphic images depicting violence.

Fact-checking in the moment to quash a rumor or fabrication is important, but what about years after something first appeared? Social media content, whether true or false, has a way of hanging around.

Take this photo from a horrific accident in the Democratic Republic of Congo (DRC) seven years ago. Since it was first published, it has been misleadingly used all over the world to illustrate tragedies that actually took place in Nigeria and Myanmar.

These incorrect pairings of image and event — “false descriptions” or “false contexts” (in Global Voices or First Draft News terminology) — don't negate the fact that there has been plenty of accurate reporting of the events in DRC, Myanmar and Nigeria. However, it does raise questions about our appetite for images with news.

What happened in the Democratic Republic of Congo

In 2010, a fuel tanker traveling through Sange, a town in Eastern DRC, overturned and exploded, killing over 230 people. Years of neglect following civil war had ravaged Africa's second largest country and turned roads in the area into dangerous paths filled with difficult-to-navigate potholes. Tragically, the tanker fell victim to them.

Officials described a fireball that engulfed dozens of homes and a cinema nearby that was packed with people watching World Cup football. Houses were scorched to a crisp and charred bodies littered the streets, with many people were burnt beyond recognition. 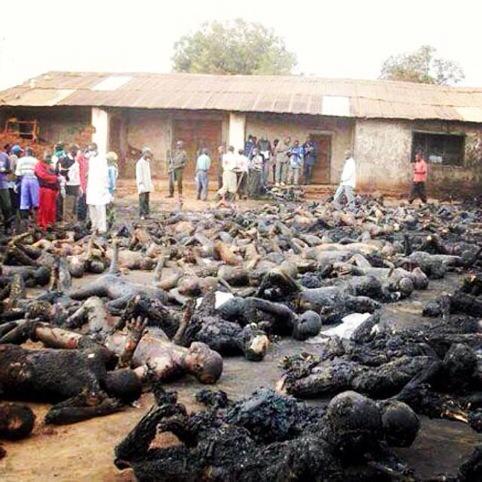 This picture was taken in Sange, DRC, showing victims of a tanker explosion on July 3, 2010. This particular version was originally captioned as: “This is Nigeria.” [sic] by Imgur user Mystical Monkey, January 12, 2015.

Several photos of the incident depicted the horrifying scenes from the day. Above is one example. It shows rows of charred bodies lined up on the ground as people look on.

But the story doesn't end there. Over the years, this same photo has been trotted out multiple times on social media, blogs, and other platforms and wrongly attributed to real but unrelated tragedies, most notably incidents in Nigeria and Myanmar.

What did and did not happen in Nigeria and Myanmar

On 3 January 2015, Boko Haram militants attacked the remote Nigerian towns of Baga and Doro Gowon. Eyewitnesses graphically described atrocities that they were forced to flee from. Houses and shops were burnt and corpses lay in the streets and in bushes.

There were reports that anywhere from 150 to 2,000 people were massacred, but the numbers couldn’t be confirmed. “No one stayed back to count bodies,” one resident told Human Rights Watch. Many were hacked, shot, and burnt to death. Only satellite images were available to illustrate the aftermath. The reason for the attack was also unclear, but Baga's army base has been a continual point of conflict between Nigeria's military and Boko Haram's effort to gain territory (examples from 2013 and in 2015).

And this is where the DRC image appeared again, when it was falsely presented as evidence of the fact and possible scale of the assault:

This is Nigeria. A massacre of 2000 happened 2 days after Paris.

They are not Charlie. They are dead. pic.twitter.com/xm5AesVXOe
— No Justice No Peace (@drumbeats4peace) January 12, 2015

In fact, this misuse of the DRC image was only one in a series of misattributions; Africa Check has documented associations with Nigeria since 2014. In all these cases, the image was presented as proof of mass killings. Going further, personal commentary like this example incorrectly linked the DRC image to mainstream news sources to make the case.

The Sange image also made an appearance in association to the deadly persecution of Muslim Rohingyas in Myanmar. According to one flash report published by the United Nations (UN), those fleeing described beatings, rape, and a number of deaths, some by burning. As others reported violence against the Rohingya people, posts that paired descriptions with photos from DRC like the following appeared: 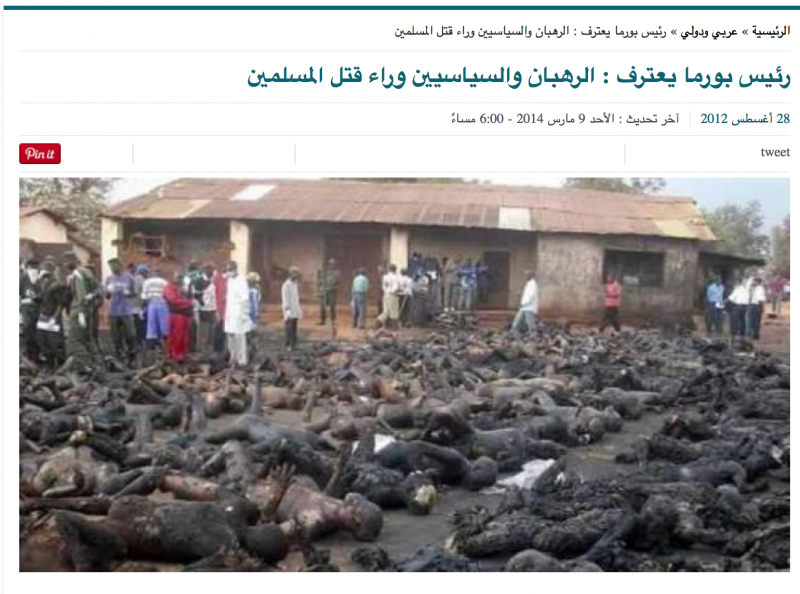 This image comes from a Saudi Arabian news site that falsely alleged in 2012 that Myanmar President Thein Sein said monks and politicians were involved in the killing of Rohingya Muslims, and in addition used the DRC image to illustrate the information. The original post accessed 26 April 2017 is available here. Other news organizations, citing AFP as their source, also incorrectly attributed to Thein Sein the claim, but without falsely associating the DRC image.

The global reach of false descriptions

Traces of these mistaken pairings go as far back as 2011 and 2012 and, indeed, are from all around the world. Using a “reverse image search,” you begin to see how extensively information can cross borders. A reverse image search engine on TinEye across 18.8 billion images (as of May 3, 2017) found 344 very similar photos to the DRC photo in question on a mix of personal pages, social media platforms, and community and national publications. They are in many languages: English, Russian, Spanish, Arabic, Dutch, German, Greek, Portuguese. Some forwarded the false reports, while others occasionally attempted to debunk the fabrications.

We isolated examples of misuse and associated them to specific countries based upon what site they were published on in order to show the reach more clearly than that of language alone.

More than one example of misuse may exist from the countries listed below (which are also sometimes linked to one another). Here are some of the cases that are still possible to fully track down (orange on the map): 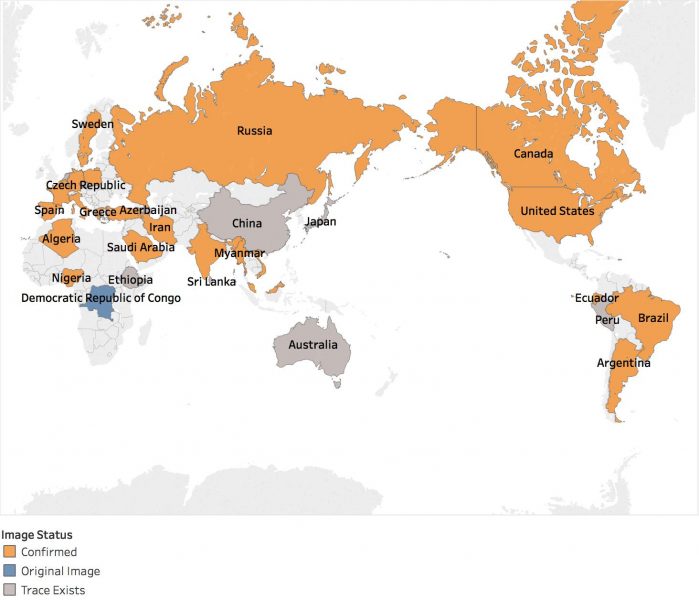 Map: NewsFrames. Country examples of false pairings of the DRC image with Nigeria or Myanmar. The orange countries indicate sites and servers where examples of fabricated or false news are still available. The countries in grey are examples that, according to the metadata and information available in TinEye, are likely to also exemplify false examples. As a reminder, the source of this image is the Democratic Republic of Congo (in blue).

There are other confirmed examples of falsely using the image in Sweden, Poland, Belgium, Netherlands, and Argentina.

Other accounts, aggregators, and sites from the following country locations (in grey on the map) are also suggested by TinEye, though no longer fully traceable: Czech Republic, Australia, India, Peru, Netherlands, Ethiopia, Sri Lanka, Azerbaijan, Japan, and possibly China. (Records exist on the crawler engine with URLs and time-date stamps and occasionally possess image filenames related to Nigeria or Rohingya Muslims.) In all these cases, which occur much later than the original 2010 disaster, the image may ultimately bear a correct description, but the original post is not available or accessible.

There are two strong themes or frames that run through these posts, and the first focuses on religion. The photo has been used in terms of larger discussions about silence related to the killing of Christians by Muslims or, in defense of Muslims, the killing of Rohingyas by Buddhists. A second framing uses the image to discuss the undervaluing of African lives compared to European or French lives.

Making sense of religion and the value of human life is important, which is why the use of images in association with these efforts is worth examining. But a deeper question is what happens when readers can no longer trust these images. With social media, there are scores of people who may be inadvertently partaking in muddying the waters around a tragedy. Does the atmosphere of misinformation and disinformation suggest true atrocities are false and take away from the actual horror of what has, in fact, happened in DRC, in Nigeria, and in Myanmar?

The dissemination of violent images has long been debated (as in this example). One argument is that withholding images is a refusal to acknowledge the tragedy, and these images are at times requested by victims themselves. Yet there has also long been a concern that violent images desensitize readers and viewers, making them lose their ability to empathize (such as this study which examined the effects of violent media on helping others).

While there's much to be debated about violent images in the news media, the fact is they're critical to news coverage today. As technologists experiment with algorithms to aid the fight against “fake news,” they will need to think carefully about situations where a picture suggests one thing, when in fact it may be used out of context or altogether in a false way. Any analysis of false descriptions should also consider how truly international it can be.